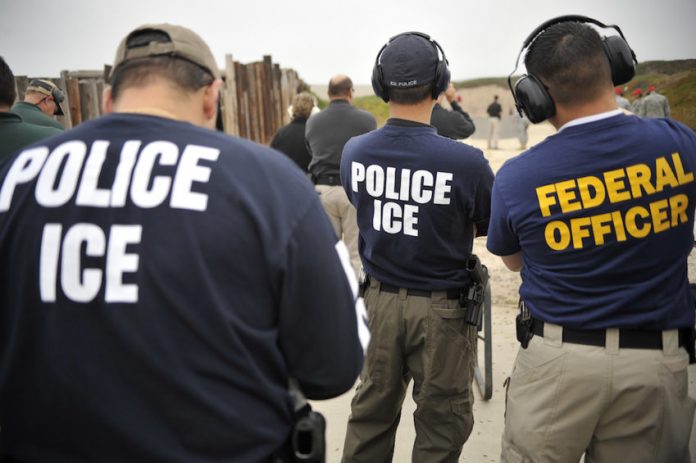 News Americas, FORT LAUDERDALE, FL, Fri. Oct. 11, 2019: While many have been distracted by the whistleblower’s complaint; Donald Trump’s foot in mouth disease over that Ukraine call; the Democratic congress’ push for an impeachment inquiry and all the latest drama in this bad soap opera we are trapped in, the U.S. Immigration and Customs Enforcement (ICE) agency has been quietly and wildly ramping up its enforcement actions.

No more announcements of those so-called raids to alert activists and communities. It’s been a silent assault. In a five-day targeted enforcement action that wrapped up on Sept. 25th, US ICE said it nabbed a total of 497 immigrants in 10 states, most “driven by leads developed by the local field office in conjunction with the Pacific Enforcement Response Center and the National Criminal Alien Targeting Center.”

The majority were ‘ICED’ in New York, the Hudson Valley and Long Island – a whopping 82; while in Boston, another 80 were arrested, bringing the total in those two states alone to 162.

ICE operations were also conducted in North, South and Central Texas and Oklahoma as well as Michigan and Ohio, Philadelphia, New Jersey, Colorado and Wyoming.

In Michigan and Ohio, 46 were arrested, while in Philadelphia, 45 were nabbed along with another 42 in Colorado and Wyoming.

While several of those nabbed were criminal immigrants who had committed serious crimes, including rape, sexual abuse and assault of children as well as weapons and assault charges and undoubtedly deserve to be deported, many were nabbed for crimes such as operating a vehicle without a license, driving with a suspended license, driving while intoxicated, driving under the influence, illegal re-entry, resisting officer/arrest, obstructing police, possession of marijuana and obstructing official business.

Hardly a “national security, public safety and border security” threat, won’t you say? ICE itself has insisted that those are largely the immigrants it goes after, but its own record is proving that is not true.

The reality is that ICE as it rightly states at the bottom of its own press releases, “does not exempt classes or categories of removable aliens from potential enforcement.”

Which means it does not care if a parent is ripped away from their children because of a minor offense or the impact of such a removal on a U.S. citizen child or children.

The Trump administration is sticking true to its campaign promise of removal of all immigrants “in violation of immigration law.” Little wonder that according to ICE data, as of June this fiscal year, 282,242 immigrants were deported and those numbers will obviously be higher by the end of fiscal year 2019, Trump’s third year in office.

Immigrants beware is the message. If you are a green card holder and qualify to become a naturalized citizen, do so now; if you are an undocumented immigrant, find a way to get legalized as ICE’s net is spreading rapidly  and far and wide.

The writer is publisher of NewsAmericasNow

Words that could save a vegetarian’s bacon – Independent Online