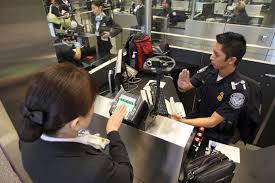 News Americas, New York, NY, Fri. June 19, 2014: A U.S. citizen arriving from the South American nation of Guyana is facing federal narcotics smuggling charges after being busted with cocaine in a suitcase handle at J.F.K Airport.

Warren Hawk was busted by U.S. Customs and Border Patrol agents recently with over four pounds of cocaine in the handle rails of one of his suitcases. US Border and Patrol agents said Hawks’ suitcase was probed after one of the rails looked unusually thick.

The cocaine was put at a street value of over US$82,000.Hawk now faces prosecution in Brooklyn federal court.

In recent months, several individuals arriving on flights from Guyana and Trinidad have been busted for cocaine concealed in weird places, including in goat meat.

“CBP agents continue to adapt to various concealment methods employed by these smugglers and CBP’S remains ever vigilant in protecting the United States from the distribution of these dangerous drugs,” said Robert Perez, director of CBP’s New York field operations.

The Evangelical Push to Save Immigration Reform – The Atlantic