News Americas, MIAMI, FL, Mon. Nov. 7, 2016: With just a day to go before Election Day 2016 tomorrow, Democratic Presidential nominee Hillary Clinton made a last ditch effort to secure Haitian-American and Latino voters in the battle ground state of Florida over the weekend.

Clinton dropped in on her Little Haiti field office on Saturday to try to get the Haitian voting bloc, which is part of the large black voting bloc in South Florida, to help her win the state. There she met with Trayvon Martin’s mom Sybrina Fulton, who she calls a friend; Dr. Laurinus Pierre, head of the Democratic Haitian American Caucus of Florida and Rep. Stacey Plaskett. 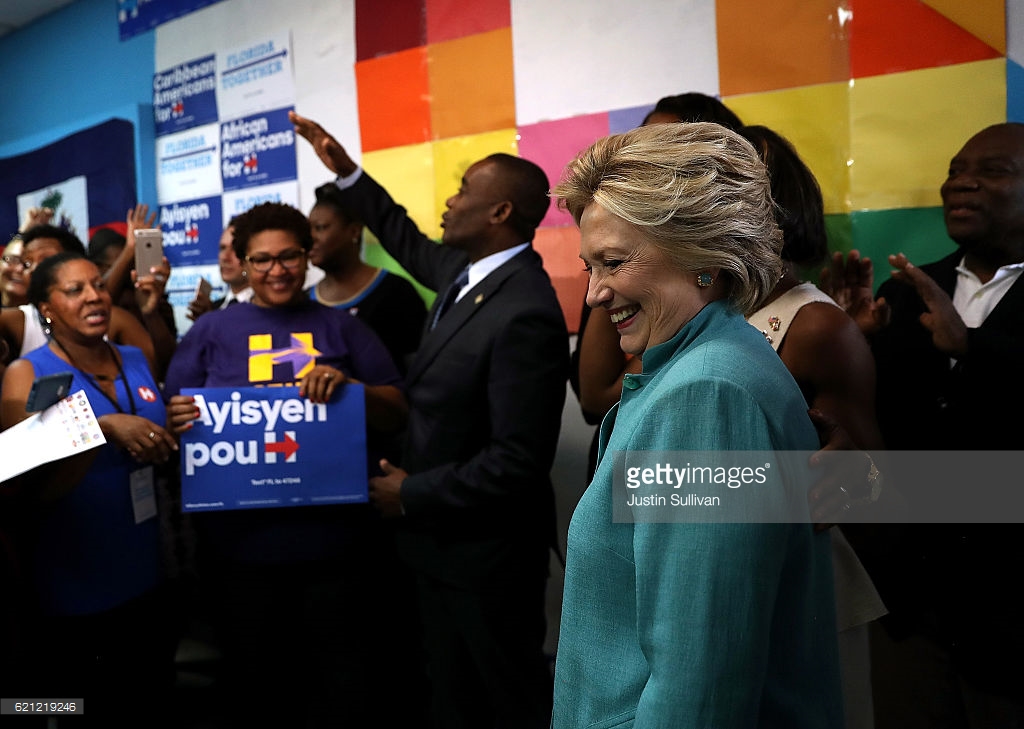 Little Haiti is the largest Haitian community outside Haiti, and Haitian Americans have voted reliably Democratic in the past. But this year, some in the community there have said they are choosing controversial Republican nominee Donald Trump over Clinton because both the Secretary of State and her husband Bill Clinton have failed Haiti.

But Hillary Clinton made her pitch anyway. “Haiti has been close to my heart for a very long time,” she said. “And we really feel a sense of connection to Haiti and all of the challenges that Haiti has faced — the continuing terrible consequences of weather, the earthquake in 2010 — so I want to be a good partner with the people of Haiti.”

“There’s work to be done. More work than can be done by any one person alone,” Clinton added, as she cleared her throat. “It kind of chokes me up,” she said, before turning to an aide behind her and coughing.

“I care so much about doing this,” she added as her voice grew hoarse and she stood with her hands on her chest. “But I can’t do any of it unless I win. Let’s make it happen!”

GETTING THE CARIBBEAN AND BLACK VOTE OUT IN FLORIDA

There has been a concerted effort by Democrats to rally the diverse black immigrant vote out to the polls, especially in Florida. One event was targeted to Jamaican-American voters and was called “dance to the polls” according to Rep. Alcee Hastings.

Jamaicans in South Florida have also set up a Facebook page called “Jamaican Americans for Hillary” or JAH, and are handing out gold stars on the page to everyone who logs on to say they voted early.

Meanwhile, iAmerica/iAmerica Action is beating the drums literally to get out the Haitian and Dominican votes. Ruth Moreno, a Florida state coordinator with iAmerica/iAmerica Action, told the Miami Herald that the group, in partnership with other organizations, has had a Haitian band and salsa orchestra walk along with a parade to the polls and help stage a block party.

“As an Afro Latina, when I first moved here from the Dominican Republic, it was the first time I had a racialized experience and saw that I didn’t fit in the traditionally white community. Seeing a lot of the ads targeting Latinos, they had people who didn’t speak to me. If I didn’t speak to you in Spanish, you wouldn’t know I’m Latina,” Moreno was quoted as saying.

The group also spent time Friday on Biscayne Boulevard handing out cortaditos, small cups of Cuban espresso, pastelitos and croquetas “to pay respect to the Cuban culture and to speak to Cuban voters as well.”

Clinton also met with Cubans and Colombians in Miami-Dade County Saturday to get them to vote early ahead of the deadline Sunday.

According to FloridaTurnout.com, some 2.26 million Republicans and about 1.2 million Democrats had voted as of Saturday in the Sunshine state. Florida has 29 electorate votes and the candidates need 270 to win the presidency.

Clinton’s campaign has spent more than $267 million in television advertising nationally through Election Day. Trump, who claims a net worth of roughly $10 billion, invested $93 million, according to data collected by Kantar Media.