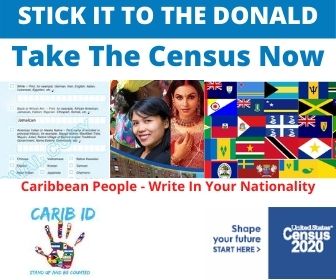 News Americas, FORT LAUDERDALE, FL, Fri. July 31, 2020: It is no secret that Donald Trump has made immigrants a scapegoat to propel himself to the top of the deplorable pile since he began his run for office. And he has continued scapegoating them because that is all he can do to keep his base – afraid of losing majority power to black and brown people – in check.

After the way he has mucked everything else up including the COVID-19 response and with over 4 million Americans are infected and nearly 147,000 dead at the time this column is being written, The Donald is back to his old tricks.

With less than 100 days to go before the November 3rd general elections and with a scent of defeat wafting into his big nostrils, he has decided to pull the ole goat out of the bag and return to his favorite reality TV game – ‘Scapegoating The Immigrants.’

On Tuesday, July 21, 2020, Trump decided he will get out his pen and sign off on an executive order that good ole Stephen had ready and waiting around.

Who cares about laws right? King Trump decided to dictate to the federal government not to count undocumented immigrants who take the 2020 Census when allocating House districts. Constitution be damned! But here is Trump preaching from his pulpit of lies: “Respect for the law and protection of the integrity of the democratic process warrant the exclusion of illegal aliens from the apportionment base, to the extent feasible and to the maximum extent of the President’s discretion under the law.”

But someone forgot to tell Trumpeto and his band of idiots that there is no practical way to do this. First off, how will the Census know which immigrant is documented or not? The Census cannot ask people for immigration status even though for the first time this year you can write in your nationality or ancestry.

Of course, Trumpeto and Stephen forgot that their bigoted push to add a citizenship section to the Census forum did not work. But who cares? In their heads, it will work, so on to phase two; never mind phase 1.

Let’s just dictate it and screw the details!

And yes, I know many are aghast at the barefaced, unconstitutional political ploy to help Republicans as apportionment is the process of deciding how many members of the House of Representatives members each state will receive based on that state’s population.

But are you still surprised? This is a man who feels he can only win on the backs of immigrants and many in his party are happy to cheer him on to ‘White Power Again.’

But there is a way fellow immigrant that we can take that power away and Make America Brown Again!

The first is to take the 2020 Census simply because they are hoping you will be so intimated and fearful, you won’t. So go online right now at 2020census.gov and fill out the census.

And the second is to register and vote this November 3rd like your life depends on it.  Your mantra needs to be ‘Anyone But Trump.’

This is how you take the power back and really Stick It To Trump in 2020 and send him packing.

The writer is publisher of NewsAmericasNow

The Lede: Venezuelan Opposition Leader Tweets at the President