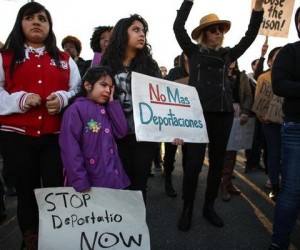 This past week, we lost an immigrant who would have been proud to see me reach letter number 70 in this series to you. This ardent and passionate “behind the scenes community warrior” would also have been happy to hear that you have finally decided to review your administration’s policy on deportation.

It is sad indeed that J.D. Livingston, a quiet, positive and inspiring Guyanese immigrant, who spent more than a decade as a member of the Rev. Al Sharpton’s National Action Network and also as the producer of Imotep Gary Byrd’s ‘G.B.E. Mindflight’ on WLIB 1190 AM radio, did not make it to hear this news or see me reach this milestone.

I can almost hear his comments: “Sister Felicia, thank you for keeping up the fight. It will happen, my sister. I believe it. Thank you for your kindness.” I know JD is smiling down from heaven at this milestone letter and the latest news on the immigration front to come out of your administration.

The truth is Mr. President, there are millions of JD’s around the country that are hopeful that you will make a difference for immigrants, especially the undocumented.

There are also thousands of families who desperately need help and an ease of draconian immigration policies that are ripping families apart and turning children into orphans in the United States.

According to a White House readout on Thursday, March 12th after a meeting with Hispanic lawmakers at the White House, you said you’d direct the Department of Homeland Security to “do an inventory of the Department’s current practices to see how it can conduct enforcement more humanely within the confines of the law.”

Finally, Mr. President, you are offering some empathy and proving why we elected you.

As Rep. Luis Gutierrez, D-Ill., accurately summed it up: “It is clear that the pleas from the community got through to the president.”

It is especially important now to use administrative powers since House Republicans have proven yet again that there’s virtually no chance of a deal on immigration reform this year.

The House GOP’s March 11th Enforce the Law Act, which they passed and which seeks to curtail your administration’s use of executive power and crack down on prosecutorial discretion such as your decision to grant deportation relief to certain undocumented young people in 2012, tells exactly where Republicans stand on this issue.

It is not enough to wait on the flip-flopping GOP to fix the broken immigration system. They have shown again they will do nothing because they have an issue with you Mr. President. Now it’s time indeed for other solutions.

JD would be proud of you and so will millions more of Americans, including the children of those immigrants facing deportation when their only crime is fighting to find a better life for their families.