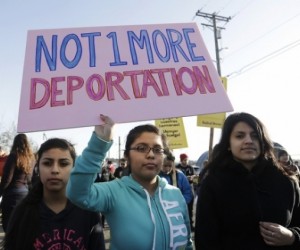 The big question on everyone’s lips this Cinco de Mayo regarding immigration reform was will you act or will you let bigots like Rep. Steve King, (R-Iowa), stand in the way of giving 11 plus million people a fair path to legalization?

I think Mr. President, the card is in your hand and you should play it by this summer or all hell may  break loose.

Extremism on the right will undoubtedly ensure immigration reform is never passed and advocates on the left – antsy and upset with you and your continued failure to deliver on your promises – will leave the Democratic Party in a lurch and only increase civil disobedience exercises making for a very hot summer indeed.

King has made it clear where he stands on immigration and immigrants. This is a racist of the highest order whose rhetoric on immigrants and immigration should land him in jail. King is now famous for such ideas as using an electrified fence to deter illegal border crossings, similar to keeping livestock contained, and saying that some young immigrants have calves the size of cantaloupes because they haul marijuana across the desert.

And he has compared granting veterans citizenship to handing out “M&M’s or Tootsie Rolls” at a parade. King sees immigration reform as the latest Revolutionary War he and his brethren must fight.

He himself has said he is “girding my loins for battle” and insists there are 50 to 70 Republicans House member who would “fight to the last drop of blood” against a comprehensive immigration bill.

King and his cronies know who controls the real power in the House of Representatives and it’s certainly not Speaker of the House, John Boehner, despite what some may think.

So all your VP did on Monday, May 5th was waste his breath in urging Boehner to “stand up” to those in his party who oppose immigration reform. The fact is, conservatives in the Republican Party are running the House and they have made it clear there will be no immigration reform under their watch – maybe not ever in a Republican-controlled House.

They know Boehner’s time as speaker is limited. They will make sure he’s gone come January. Boehner too knows the King crew want his head on a platter. Ted Cruz, the other mad hatter, has made it a point of stirring up the extreme right wingers to take Boehner out.

So do we wait for this to happen? Do you sit around Mr. President in your lame duck session and do nothing but watch the dream of immigration reform run like water off a duck’s back?

I say the time to act must be now. Use your executive power for something really historic for a change. Screw the House GOP and show King and company who the real leader of the Free World is. That’s right – the son of an African immigrant must act for immigrants in need in America!

This should be your legacy, not a failed attempt at health care reform. As Clarence Darrow, a  leading member of the American Civil Liberties Union, once said: “True patriotism hates injustice in its own land more than anywhere else.”

Show some heart and true patriotism this Cinco De Mayo, especially for those brave teenagers who choose to get arrested in front the White House last week while you were off in Asia. Give the undocumented some relief once and for all. Let’s make this summer a true celebration indeed.

4 Things I Want My Kids To Know About My Long-Gone Mom On Mother’s...

Caracas Journal: Protesting in Venezuela, With Antipathy Toward Cuba