News Americas, NEW YORK, NY, Sat. Feb. 12, 2017: A 54-year-old man has become the first known Caribbean national to be deported back to the region under the Donald Trump administration.

Dominican Republic-born Martires Molvan-Figeureo, who entered the US on a visitor’s via and overstayed, was wanted for murder in the DR. He was removed Tuesday, Feb. 7th, by U.S. Immigration and Customs Enforcement’s (ICE) Enforcement and Removal Operations (ERO) officers in NYC.

Molvan-Figeureo, was escorted by ERO officers via an ICE Air Ops charter flight to Louisiana, where he then boarded a flight to the Dominican Republic and was turned over to local authorities there. 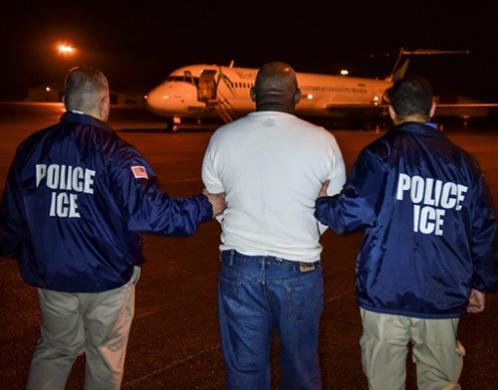 In 2012, while an active member of the Dominican National Police, Molvan shot and killed a man who was allegedly resisting arrest.  He had been found guilty in the District Court of the Judicial Department of San Pedro de Macorìs.  Molvan was sentenced to 20 years imprisonment prior to fleeing to the United States.

In Jan. 2016, ICE Assistant Attaché for Removals, Santo Domingo, Dominican Republic notified ERO New York that Molvan was the subject of an Interpol Red Notice and was residing in the New York area. Early Dec. 2016, an immigration judge in New York ordered Molvan removed from the United States to the Dominican Republic, paving the way for his repatriation.

“We will not allow violent criminals to seek refuge from justice within our borders.  Molvan’s removal reflects ERO’s commitment to public safety in the United States and also abroad,” said Thomas R. Decker, field office director for ERO New York.  “Not only will we continue to seek out dangerous criminals who pose a threat to our communities, but they will be removed.  It is our resolve to ensure that our cities are made safer while these lawbreakers face consequences in their home countries.”

In fiscal year 2016, ICE conducted 240,255 removals nationwide. Ninety-two percent of individuals removed from the interior of the United States had previously been convicted of a criminal offense.

Border Crossers Volunteer To Be Arrested, Hoping To Benefit From Immigration … – Fox...