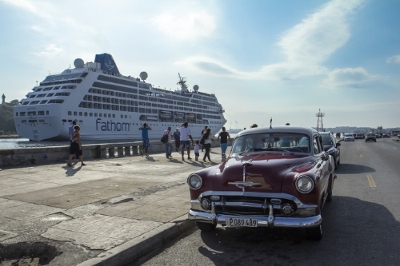 News Americas, MIAMI, FL, Weds. May 4, 2016: Cuban history was made yesterday when a US cruise ship docked in the Cuban capital, Havana from Florida for the first time in more than 50 years.

The Fathom Adonia luxury cruise ship sailed from the port of Miami and carried 704 passengers to the Communist Caribbean nation that has been opening up to trade in recent months after a restoration of diplomatic relations with the US.

Cubans waved as the ship arrived and hundreds of passengers stood at the railings taking pictures under a perfect blue sky as the white vessel docked at Havana’s colonial-era old town.

“Our arrival today in Havana is a special moment in history that contributes to a more positive future, and we congratulate our colleague Arnie Perez on being the first person born in Cuba to step ashore under Cuba’s new policy,” said Arnold Donald, CEO of Carnival Corporation. “We are so honored that Carnival Corporation and our Fathom brand can be part of such a meaningful milestone. As we worked to become the first U.S. cruise company to sail from the U.S. to Cuba in more than five decades, it was clear just how much interest there is from travelers who want to experience Cuba. We believe there is no better way to experience Cuba and see this beautiful island than to cruise with us on Fathom, and we look forward to providing a very special and rewarding experience to everyone who sails with us.”

The May 2nd voyage marked the completion of the first leg of its historic inaugural voyage to Cuba that began on May 1, 2016, from Miami.

Carnival runs the cruise line and was given permission by both governments to sail ships between Florida and Cuba. The Fathom will now sail every other week from Miami to Cuba, Carnival officials say. Fathom will visit Havana, Cienfuegos and Santiago de Cuba, three ports of call for which Carnival Corporation has obtained berthing approval. Prices for seven-day itineraries to Cuba start at $1,800 per person, excluding Cuban visas, taxes, fees and port expenses and including all meals on the ship, onboard experiences and several on-the ground activities. Prices will vary by season.

House Republicans Huddling on Immigration With No Clear Consensus – PBS